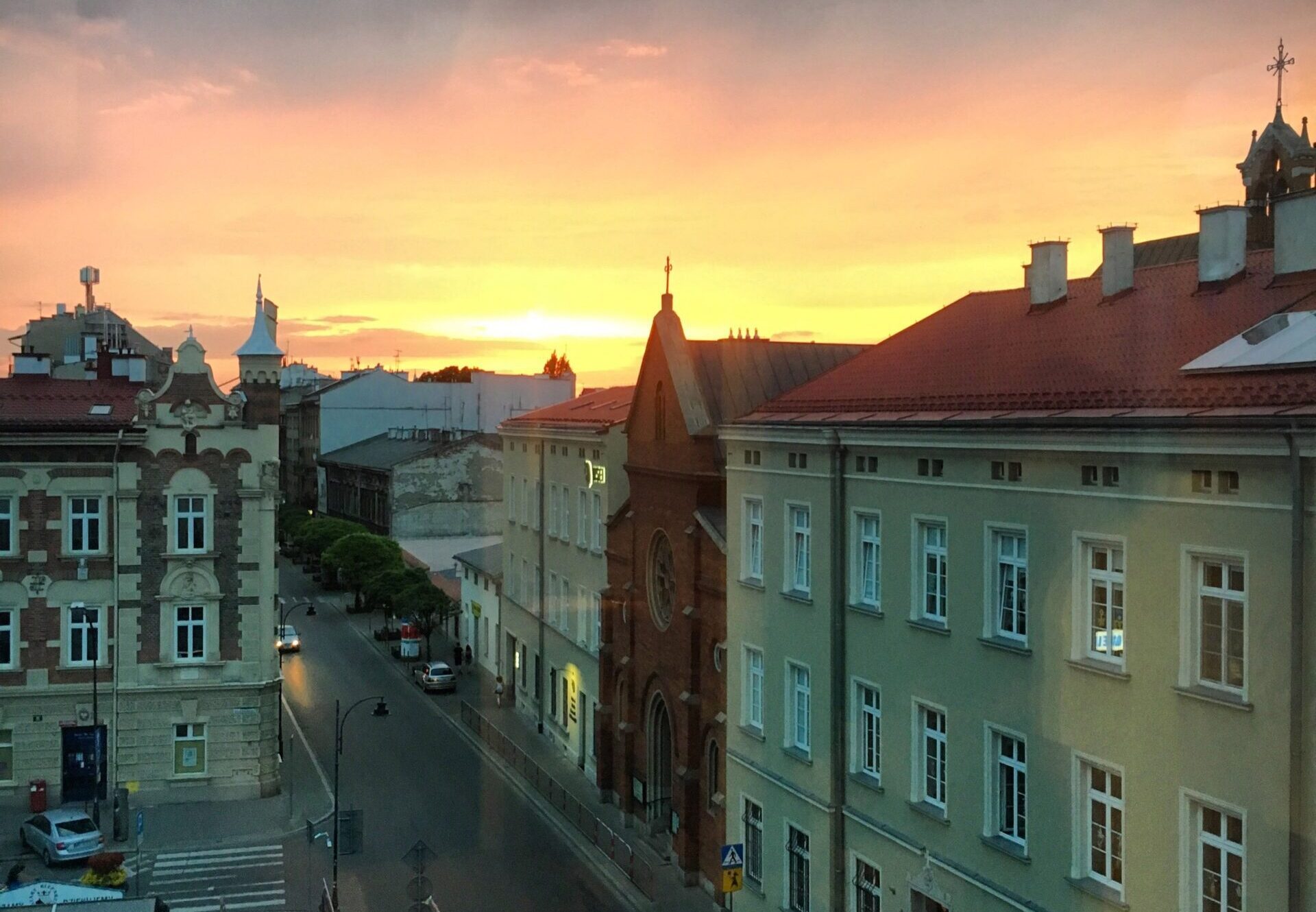 Krakow, Poland. An absolute gorgeous city to visit. After a wonderful train ride thru the countryside from Warsaw, we arrived in Krakow. Bags on tow we are determined to grab a cab to our hotel. Stepping out of the train station, taxis on view, we told the first taxi driver on line where we needed to go. After a short chuckle and a quick roll of the eye look, he closed the trunk of the car and he pointed in the direction of the hotel. Confused and a bit disoriented, ok!! a lot and with the language barrier, we took on foot and decided to ask a couple peoples down the road.

This wonderful lady that sat next to me on the train, recognized us and she came to our rescue. In perfect English she directed us on our way. Four minutes later we were in the comfortable air conditioned lobby of the Indigo Hotel. A Old meets New World Hotel. We loved it!!!

The staff was the outmost helpful. First of all we got set up in this stunning large bedroom overlooking the old town.

Secondly, for days we had been desperately trying to purchase tickets for a guided tour of Auschwitz.  English would have been our preference, but we were willing to join any French, Italian or Spanish tours too but unfortunately with no such luck.   We asked the concierge to help us. Within minutes, and I mean minutes, not only we had our tickets on hand, but we also had an English tour that was set up for us the next day early in the morning.

Yes, we were quite happy. The concierge also told us that if we needed anything, anything at all, they would be more than happy to go get it for us.  Even vodka at the 24 hours store. Ok!! We got a giggle out of that one, but our curioisity was peaked and therefore we had to check out the store now. Who knew that there were so many different types of vodka?

As the days are longer in the Northern part of the country, we took a leisurely stroll thru the Old Town. No cars allowed.

Krakow Barbican is a fortified outpost that once connected to the city walls. Located at the entrance of the Old Town.

St Peter and Paul Church in the Old Town District. Built between 1597-1619

With each vacation we take, we love to share our adventures with all of you. May they be culinary or not. Today I want to share with you our trip to Auschwitz and our pictures that we took. I will do my best not to over bore you with historical details, however, in order to describe the pictures shared, I need to .

This part of our trip was most poignant.  Auschwitz I (the original camp), and Auschwitz II – Birkenau  were a combination of concentration and  extermination camp.  The feeling of loss we felt was overwhelming.

It all began as soon as the Nazi seized the power in Germany.  They immediately passed laws to deprive Jewish members to attend  professional and civil services. Businesses held by Jews were pressured, denied and forbidden access to any commerce, advertising and being boycotted.

However, what is most incomprehensible and unbelievable,  was a meeting  of high ranking military officials that decided the faith of millions of peoples by starting a racial cleansing to create a pure race.  Furthermore, the cruelty bestowed upon those same peoples before extermination. Medical experiments conducted on prisoners being one of them.  Killing of 1.3 millions peoples took place in Auschwitz by the Nazis during WWII.

To keep all the activities away from the outside world, the SS,  appropriate themselves land by evicting their owners in within a 15 square  miles radius from the camp so they could conduct their experiments without being noticed.

Auschwitz I which is considered the original camp, first served to hold political prisoners whom started arriving on May 1940. It was outgrown by 1941. Soon thereafter Auschwitz II-Birkenau became the major site of the “Nazi Final Solution to the Jewish question”.

Daily trains from all over Europe were bringing men, women and children to those camps. Peoples were packed like cattle with no food, heat or amenities. As soon as the trains crossed the gates and stopped, everyone was to disembark to the platform. Some of them did not make the long journey.

At this point men and women were separated. All belonging were to be abandoned. The “Death Barrack” ( picture below) was used for the special isolation of those women prisoners of the concentration camp who were selected by the SS as unfit for further work and to be sent to be murdered in the gas chambers. Here they had to await their deaths, without food or water, and often for several days. Many died in the barrack before they were summoned. When the barrack was full, additional prisoners who had been selected for death were kept outside in a locked yard.

The Death Barracks held the Sleeping quarters.  Each wooden plank had six peoples sleeping on it.  When raining the bottom planks were in deep water and mud. The place was left untouched as during WWIIs

The men were marched the long mile up to the gas chambers. Here, there were told to undress so they could take a shower. Once naked they were pushed into large chambers with overhead spikes resembling shower heads. Door sealed and the Zyklon B – a highly lethal cyanide based pesticide – dropped into the chambers.

Once the gas removed from the chambers via vents, with masks the SS would remove all gold filling, any artificial limbs and jewelry from the bodies. All hair on their head razed and saved by the SS. They would afterword’s drag the bodies into the crematorium

Crematorium. The ashes were thrown in the near river, buried or used as fertilizer.

As the war was coming to end, and the Red Army coming closer to liberate Auschwitz II Birkenau, the SS started destroying gas chambers as well as all documented data that they were keeping record of.

Here is what is left standing today.

Men barracks. Most of them destroyed. Most the material taken apart by civilians to rebuild homes destroyed during the war.