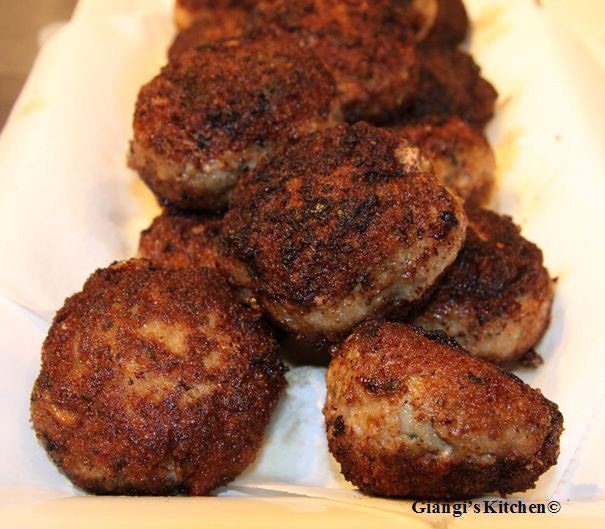 Isn’t true that some of the best dishes are the simplest one? Here is one of my favorite one, “boulettes” or meat patties.
As we never have turkey at our house with the exception of Thanksgiving, I decided to use ground turkey and sausage meat instead of the usual ground veal or beef to make the patties. While I was experimenting with new meats, I added mushrooms to the onions to the mix. The combination was quite light and tasty. The sausage meat added a nice flavor to the turkey and was not dry at all.
Instead of making the patties, the below recipe may be made into a meatloaf.
Our staples rosemary potatoes and green salad was enjoyed by all.
TIP: Taste the meat mixture before adding more pepper. Some sausage meats have more pepper than others, and too much pepper can over power the flavor.
Placing the meat mixture in the refrigerator for 10 to 15 minutes will solidify the whole and make it more manageable when rolled.
Bon Appetit!! Soak the bread in the milk.

In a large skillet over medium high heat warm the oil. Add the onion and cook stirring for about 3 minutes. Add the mushrooms and the parsley and cook 5 minutes or until there is no more juices running from the mushrooms.

In a large mixing bowl, mix the turkey and the sausage meat.

Add the egg, parmesan cheese, sage, squeeze the milk out of the bread and add the bread to the meat mixture.

Add the onion mixture and mix well. Season with salt and pepper. Mix everything together until the bread is well worked in and the vegetables are evenly distributed.

Place in the refrigerator for 10 minutes to solidify.

With your hands form individual meat “boulettes” or patties. Roll them on the bread crumbs and place them on a large piece of parchment paper.

In a very large skillet over medium high heat, add the oil. When the oil is hot but not burning, sauté the meat until golden brown and no juices are running out when slightly pressed down.

Remove from the pan and place on paper towel before serving. Pre-heat oven at 375 degrees. Spread 1 tablespoon of the olive oil on a cookie sheet. In a bowl add the potatoes, rosemary and the remaining olive oil. Mix well to coat all the potatoes cubes. Place the potatoes on the cookie sheet and sprinkle generously with the salt. Place in the oven and cook for 30 minutes or until the potatoes have formed a nice crust on the bottom and are golden on top.