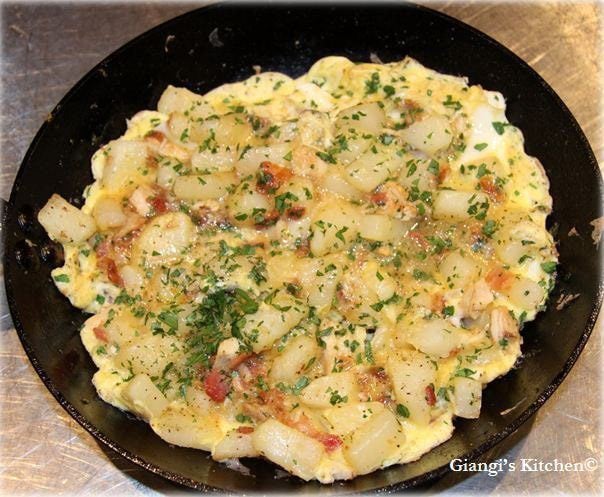 We had some left over chicken but it was not enough to make a whole meal out of it. All day I was thinking of way of incorporating it in our nightly dinner.  The idea of having an omelette for dinner is not foreign to me as it is a meal that in France we do enjoy at dinner time as well. My dad, as a matter of fact, used to prepare for us often  while growing up with any left overs we had.

The potatoes and bacon are just another perfect omelette if no left over are around. just do not forget to add parsley as it just adds the final touch to the dish.
I happened to have chicken, but any meat cut up fine is also great. I do however love my omelette running.

A nice Boston lettuce salad was a perfect side dish.

TIP: Use 2 eggs per person. Season them with salt and pepper prior to adding them to the pan. Taste the potatoes-chicken before adding the eggs and rectify the seasoning if needed.
Use extra lean bacon center cut bacon as it will not render too much fat. It none available, make sure you remove any fat rendered before adding the chicken . In a pan place the cut up potatoes dices and cover with water, add salt and cook until the potatoes are tender when a knife is inserted in the middle of it.  Drain, rinse with cold water and set aside.

Meanwhile in a large skillet add 1 teaspoon of oil and cook the bacon over medium high heat until half way crisp. Stir constantly so it will not burn or stick to the skillet.

Add the potatoes and cook for another 5-8 minutes, stirring gently so the potatoes do not burn on the bottom, sprinkle with parsley.

Add the beaten eggs; raise the heat to high for 1 minute until the bottom of the omelette is starting to turn golden brown, but not burned.

Swivel the skillet around and gently pull apart the potatoes- chicken so the egg will fill in and get to cook evenly.

Lower the heat to medium and continue to cook until the top is firm or to desire doneness.