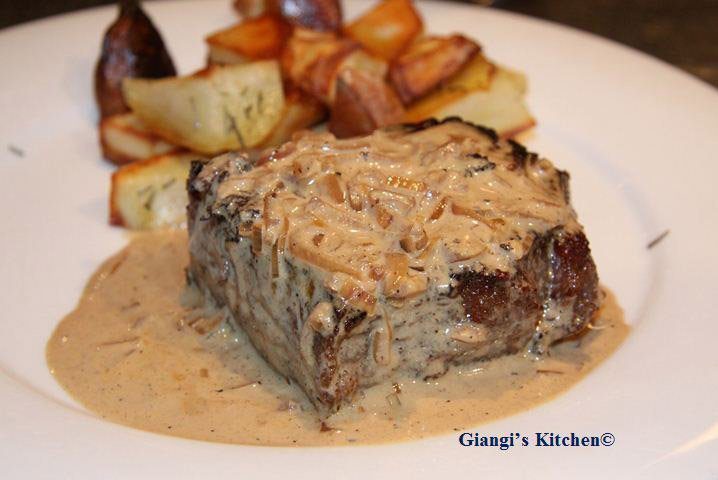 Potatoes gratin with garlic. We love to have Sunday night, dinner night, and with time and schedule permitting, we do. Tonight was no exception.

We are fortunate to have wonderful friends that are more than friends to us, but are family. Tonight we got together and had a great time.

Meat was in our mind as I had a perfectly cut filet mignon so I decided to make a new version of the Bordelaise sauce to go along side.

This sauce was more of a wine base sauce, and by having four little guys, I felt uneasy to give them the sauce, therefore I decided to have two different dinners. I will only post the adult dinner recipes tonight, as the children menus were posted on different occasions on this blog.

The Potato gratin was, if I may say so myself, the best I have ever made. Not a milk or cream base, and for that it was very light. I made a large platter and we had not a trace left.

While during cooking the top gets nicely browned, cover with aluminum foil to prevent further browning.

To make the sauce, melt 1 tablespoon of the butter in a saucepan, add the shallots and cook, stirring for 7 minutes or until very soft.

Season with salt and pepper. Add the parsley.

Trim the steaks and season with some oil.

Heat the remaining oil in a frying pan and sauté the steaks to 2-4 minutes on each sides, depending on how you like the steak.

Pour the sauce over the steak to serve.

In a mixing bowl toss together the potatoes slices and olive oil until all the slices are evenly coated.

Spread half the slices in the bottom of a large shallow 6 cups gratin dish. Distribute the garlic cloves evenly amongst the potatoes and sprinkle with salt.

Add the bay leaf then top with the remaining potatoes slices.

Pour over the boiling water almost to cover, sprinkle with salt to taste and dribble over any oil remaining in the bowl.

Place in the oven and bake until all the water is absorbed, 50- 60 minutes.

If the surface is well coated before then, cover loosely with aluminum foil to protect from darkening further.