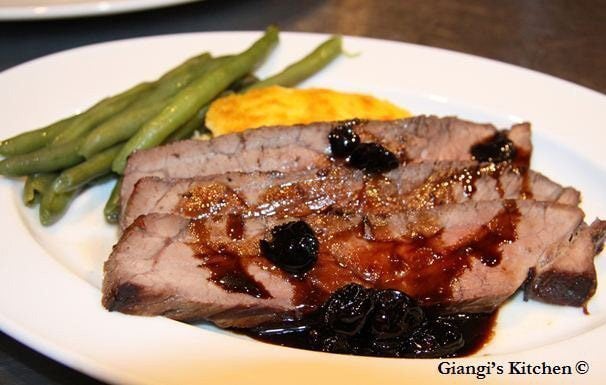 After a week-long of running around and having very simple easy dinners, last night I was in the mood to have something new. Fall is in the air and I wanted to capture it in my cooking.

Earlier in the week I was having a conversation with Rachel from  Cook, Coupon, Work, and she was telling me of a special on London Broil and was wondering what kind of recipe I could come up with. My first thought was: sauce, cranberries.

I decided to marinate it with Balsamic vinegar and honey. A sweet and sour combination. Preparing the sauce to go along was fun and it was great to have friends over that helped me with the flavor.  We tasted and played with the sauce until we reached the flavor we were looking for.  A simple polenta and long string beans was a perfect side dish for it.

TIP: if you choose to make the polenta, choose the Polenta Valsugana, available in most local grocery stores. Do not leave the pan unattended even for a second as it cooks fast.  Constantly stir so no lumps will form or splatter.
Great dinner to get in the fall mood.
Giangi
Tonight’s September 29, 2012 dinner:
London Broil with Balsamic-Honey Sauce
Polenta Valsugana
Long String Beans steamed with Butter In a large glass cooking pan mix the 2 tablespoons balsamic vinegar, 2 tablespoons honey and olive oil. With a fork poke the London broil and add it the glass pan. Turn to insure the meat is well covered with the mixture. Cover and place in the refrigerator for a couple of hours, occasionally turning the meat.

When the right consistency is reached, not too thick nor too thin, need to coat the back of a spoon without looking too thick, turn off the heat and add the butter. Mix well.

Preheated oven at 375º. In a broiling pan (the one with a top part that has slits and sits over a shallow bottom pan) place the London broil. Cook in the oven for 20 minutes. Turn the oven to broil and broil on both sides for about 5 minutes in each side.

Remove from oven, cover and set aside for a couple of minutes. Re-warm the balsamic-vinegar sauce. Slice the meat and serve with the sauce over it.